Phil Vassar is as driven today as he was when he first left his Lynchburg, Virginia home to pursue – and realize– his dream of making his mark in entertainment. A career that has seen the release of eight albums, two ASCAP Songwriter of the Year trophies, Billboard Country Songwriter of the Year, countless hits as a singer and songwriter, a mantle full of awards and the launch of his own Rodeowave Entertainment label continues to expand and evolve.

As a singer/songwriter, Phil has hit the Top 5 seven times with songs like “Carlene,” “Last Day of My Life” and “American Child” and topped the charts with “In A Real Love” and the perennial favorite “Just Another Day in Paradise.” Known as one of Nashville’s top tunesmiths, his songs other artists have taken to #1 include “My Next Thirty Years” by Tim McGraw, “She’s Right On The Money” by Alan Jackson, and Jo Dee Messina’s “Bye, Bye” and “I’m Alright.” New artist David Nail had a hit with Phil’s “The Sound of a Million Dreams,” which Billboard named the #1 song in their Top 10 Country Songs of 2012.

For Vassar, his philosophy about songs has never changed during his time spent writing hits for himself and other artists, it’s important for a song to carry a message and make the listener feel something.

In country music, a last name like LeDoux casts a big, storied and bittersweet shadow, but it’s one Ned LeDoux doesn’t mind standing in one bit. Having been a drummer in his dad Chris’ band Western Underground since 1998, Ned knew from an early age that he had “no plan B” but to play music, “Once I got the taste of the road, and being in front of a crowd and just the sound of it, it was… freedom”

For the last year, Ned has been steadily touring and opening for acts like Toby Keith, Chris Janson, Aaron Watson and Randy Houser. Yet now that he is in front of the mic, Ned has a new goal. “There is an age group who doesn’t know who Chris LeDoux is and I just want to keep his name out there. I want to reintroduce him to people who’ve maybe heard of him but didn’t know what he did. Just carry on his legacy and carry on his music and at the same time show them what I can do.”

On tour, you’re guaranteed to hear “This Cowboy’s Hat” the song most requested by his fans and a request Ned is honored to oblige. His personal favorite song to sing though is one called “We Ain’t Got It All”. It’s the first original song Ned co-wrote with his dad and seems to pick up right where Chris left off. And with his debut EP “Forever a Cowboy” available now, there is a new voice to carry on the LeDoux sound. 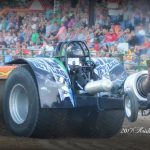