When country music lovers talk about the greatest groups in the genre, Shenandoah is always at the forefront of any discussion. Fueled by Marty Raybon’s distinctive vocals and the band’s skilled musicianship, Shenandoah became well known for delivering such hits as “Two Dozen Roses,” “Church on Cumberland Road” and “Next to You, Next to Me” as well as such achingly beautiful classics as “I Want to be Loved Like That” and the Grammy winning “Somewhere in the Vicinity of the Heart” duet with Alison Krauss. Shenandoah has recorded ten studio albums (3 certified gold) and placed 26 singles on Billboard’s Hot Country Songs chart. The boys from Muscle Shoals have left a potent legacy at country radio with over a dozen #1 records.

​Shenandoah made their first public appearance 30 years ago. They are celebrating this milestone with the nationwide “Shenandoah 30th Anniversary Tour.” The group recently signed a record deal with BMG to release their first new album in two decades. Shenandoah premiered their debut single off the album, “Noise,” on SiriusXM and marked their first release to radio in 20 years. The track is produced by Jay DeMarcus of Rascal Flatts and hit the top 30 on the country charts. Their new album, “Reloaded,” was recently released and was the highest debuting album on the Billboard Chart of their entire career. The album debuted in the Top 15 on the iTunes Charts. Last month Shenandoah premiered a brand new music video on CMT for their current single,”That’s Where I Grew Up,” featuring fellow country star, Michael Ray.

“I was driving east on I-40 from West Nashville into town to an appointment,” he recalls. “Back then, I was listening to what we were doing in my Jeep Cherokee every day. I had turned the radio on, and ‘Let The Heartache Ride’ was right in the middle of the acapella intro.”

Stewart had been living with the song for a while, and hearing it through his car speakers wasn’t that big of a deal – until he looked at the stereo and saw the numbers 97.9. “It didn’t sink in because I had it in the tape deck for days, then I realized ‘That’s the radio. It’s WSIX.’ I pulled over on the shoulder around White Bridge Road and sat there with my car idling. It was like yesterday.”

‘Yesterday’ has come full circle for Restless Heart. Then one of Nashville’s newest acts, the band is celebrating their 30th Anniversary in 2013, and Dave Innis enjoys the musical ride as much as ever.

“I think it’s been an amazing legacy, and it’s been such an honor to have been part of an organization that is still together doing it after thirty years with the same five original guys, and it’s more fun than ever.”

John Dittrich, Greg Jennings, Paul Gregg, Dave Innis, and Larry Stewart – the men who make up Restless Heart have enjoyed one of the most successful careers in Country Music history, placing over 25 singles on the charts – with six consecutive #1 hits, four of their albums have been certified Gold by the RIAA, and they have won a wide range of awards from many organizations – including the Academy of Country Music’s Top Vocal Group trophy. Those stats aside, Innis feels that their career goes much deeper than that.

“In the past few years, we have really started to branch out in the community, particularly our work with the Nashville Rescue Mission. We have hosted an event called Restless Heart & Friends – Music With A Mission that we do at the Schermerhorn Center with the Nashville Symphony. We invite a lot of our friends in the industry across all genres to join us, and all of the money we raise goes to the Nashville Rescue Mission. The other thing that stands out is the tours we have done in support of the men and women of the Armed Forces. We did some tours with the Air Force, going all over the world.”

Those audiences have sung along with their record-shattering string of hits, such as “I’ll Still Be Loving You,” “Fast Movin’ Train” and “When She Cries.” Stewart says it’s humbling to know Restless Heart has made an impact. “I’m proud of the fact that we get to hear stories from young artists and musicians that we might have made an impression or inspiring them to come to town – having number one records, and hearing the stories of what they meant to people. To know that you have been a part of something that made a difference, the power of music, the power of a song. To be a part of something that made a mark. However big or small of a mark Restless Heart made, it’s still a mark. To be able to appreciate and feel blessed that we got lucky enough to get together. I feel like it was something that was meant to be.”

And, the story is far from over, as Stewart says Restless Heart still has a lot of history to make. “We are still at the top of our game when it comes to singing and playing together. We’ve got some projects we’re working on, and we want to put the Restless Heart brand out to music fans again – to let them know we’re still here and making good music. We’re really looking forward, not trying to rest on our past laurels, we really want to do some new music. We have some fun things we’re considering to celebrate the moment, which we’re trying to put together, and reintroduce ourselves to the world, and take another stab at something.” 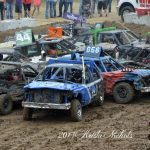